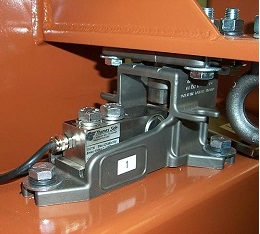 Many existing mounting assemblies provide a jacking feature which allows a vessel to be supported by the mounts prior to the installation of the load cells. Typically, the mounts will initially be fitted in a fully jacked condition; this avoids the risk of damage to the load cell, either as a result of physical abuse, or as a consequence of arc welding or other mechanical activity. Once the vessel is secured in position, the load cell is installed, and the top plate of the mount is then jacked down onto the load button, making the system live. The tried and tested method of jacking a mount is by means of one or more threaded support pillars which engage with the top plate of the mount. This arrangement works to best advantage when the load applied to the mount is small – often when the vessel is empty. Under other load conditions, an external jack is usually employed to raise and lower the vessel in order to avoid overloading the support pillars. LeverMount’s® unique design is such that no separate support arrangements are necessary to raise and lower the vessel. The base casting itself provides a stable load-bearing platform prior to installation of the load cell. Once the vessel is in position and the two transit bolts are removed, the load cell is then used as a lever to raise the top plate of the mount into the working position, whether the vessel is empty or full. Removal of a load cell at any time is accomplished by reversing the procedure, and requires no specialist tools. Installation, operation and maintenance of the vessel weighing system is consequently made safer, easier, swifter and less costly.